Sesriem and the Namib Desert

The Namib Desert, which as its name suggests is located in Namibia, is one of the oldest deserts in the world, extends for over 2000 kilometers along the southwestern coast of Africa and boasts some of the highest dunes on the planet.

The Namib Desert covers the entire length of Namibia, borders Angola and South Africa and is connected to another great desert, in fact it merges with the Kalahari to the east.

The dunes plunge directly into the Atlantic Ocean, creating one of the most fascinating and spectacular coastal stretches in the world; the sand of the dunes changes color during the day, from yellow to red, giving this desert a charm impossible to describe.

The most visited area is the Namib Naukluft Park located on the Atlantic coast and bordering the Dorob National Park to the north, the Diamond Restricted Area to the south.

Despite the extreme climatic conditions in the park there are numerous animal species that have adapted perfectly to this apparently inhospitable environment. 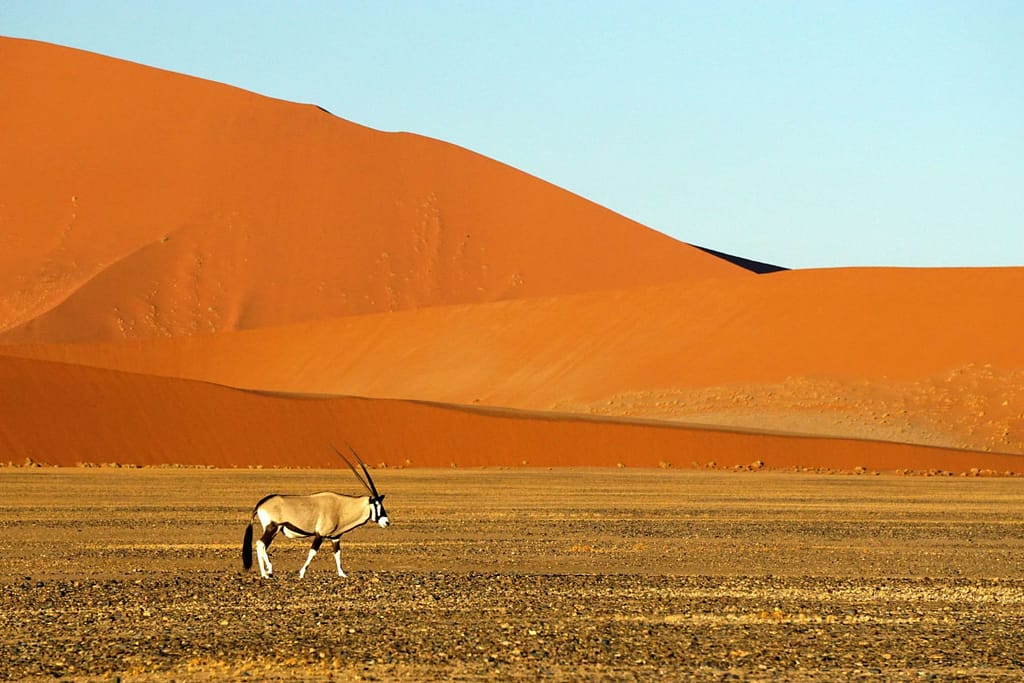 The Park was made up of four regions, namely the Namib, Naukluft Mountains, Sesriem-Sossusvlei and Sandwich Harbor.

Highlights of the Namib Naukluft Park

The Namib is the oldest desert in the world and extends far beyond the borders of the Namib Naukluft National Park and encompasses all of western Namibia.

The part of the Namib within the Park is about 500 km long and from 100 to 180 km wide, here are the highest dunes in the world, which reach 300 meters in height.

The Naukluft Mountains, almost 2000 meters high, constitute the eastern extension of the Park.

Sandwich Harbor is located north of the Park, about 45km south of Walvis Bay; it consists of a 10 km long bay or lagoon, surrounded by dunes and vegetated by reeds.

This bay is home to more than 200,000 birds including flamingos, cormorants, pelicans and other seabirds and can only be reached by 4 × 4 from Walvis Bay.

The main attraction of Namib Naukluft Park is undoubtedly the area known as Sesriem where Sossusvlei, Deadvlei and Sesriem Canyon are located.

Sossusvlei is located in the heart of the Namib Naukluft National Park, it is an ancient saline depression surrounded by high dunes with orange-colored sand that at sunset turns into an intense red that gives splendid sunsets.

Deadvlei is the most fascinating pan of the Namib-Naukluft National Park, the black skeletons of the trees that stand out against the background of the orange dunes and the white saline depression, making it one of the most photogenic places in southern Africa.

Not to be missed are Dune 45 and Big Daddy, the highest dune in the park. Climbing the dunes is a fascinating experience and the view from the top of the dunes is unparalleled.

The Namib Desert is famous for being one of the most important diamond areas in the country, there are numerous mines still active as well as numerous old mining villages now abandoned and that the desert is englobing.

Ghost towns are places shrouded in mystery and a photographer’s paradise.