Etosha National Park, located in the north of Namibia, is one of the largest nature reserves in Africa with a protected area of ​​22,270 square kilometers with forests, grassy plains and saline desert or the pan.

The name Etosha means “great white place” in the local language and owes its name to the great pan; the white salty depression covers about 23% of the park’s surface and is one of the largest in the world.

The Etosha Pan is the distinctive feature of the park, the pan covers a large area overlooking the northern area of ​​the park, for most of the year it is dry and a blinding white but during the rainy season it floods attracting millions of birds including flamingos, pelicans and waterfowl and numerous mammals.

During the dry season, sightings of animals are relatively easy thanks to the numerous artificial water holes that have been created around the southern perimeter of the pan and which attract many animals.

Etosha National Park is home to four of the famous BigFives, namely lion, leopard, elephant and rhino, absent only the buffalo which was exterminated by European settlers. 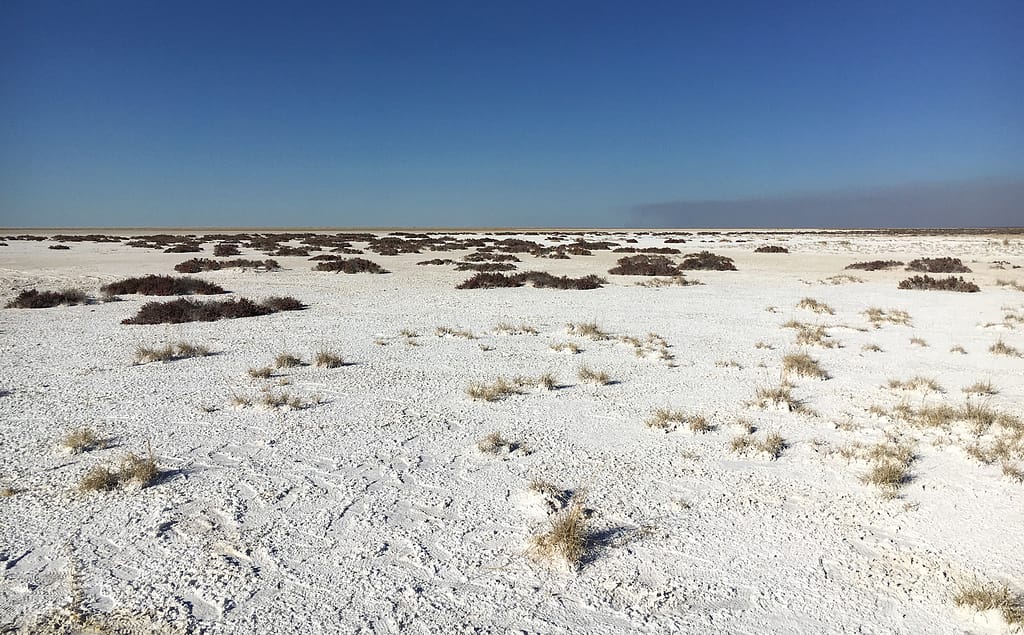 The park’s majestic elephants are nicknamed the ghost elephants because of the sandy, white soil they sprinkle with which makes them a pale color reminiscent of a ghost.

In early 1907 the German government proclaimed Etosha Pan and its surroundings a protected reserve and in 1952 construction of fields and roads began and the area was declared a National Park in 1967 by an act of the Parliament of the Republic of South Africa, which administered these lands. from the Second World War.

The Etosha National Park is open, and can be visited, all year round; its landscape varies greatly according to the seasons which, in this part of the African continent, are only two: winter and summer.

The winter period begins in May and ends in October; from the month of May, when the summer rains are over, the park land begins to dry up and the seasonal pools gradually dry up; from June to October the water of seasonal rains gives way to drought and the salt lake gradually dries up.

The summer period, which runs from November to April, is characterized by high daytime temperatures, from 30 to 40 degrees, and by seasonal showers that make the Etosha National Park green again and which, thanks also to the contribution of seasonal rivers , partially fill the basin of the salt lake; only in particularly rainy years does the pan completely fill with water, but the depth of the water never exceeds 10 cm.

Summer is the best time for birdwatchers, in fact in these months there are in the park, in addition to the resident species, also the birds that migrate here from the northern hemisphere and some aquatic species, attracted by the presence of water, including flamingos who prefer high salinity waters and then stop here on their way to the Makgadikgadi Pans Reserve in Botswana for the mating season.