The city of Cairo in Egypt

The city of Cairo in Egypt is the last stop on our journey across the African continent, the city that the Egyptians call Umm ad Dunya or the Mother of the World, is one of the great megalopolises in the world and certainly one of the richest cities in treasures. archaeological.

The city of Cairo is full of history, exciting experiences, delicious coffee and fabulous food; the Nile has been flowing for thousands of centuries, giving it a unique atmosphere.

Among the main attractions of the Egyptian capital, the Giza plateau with the Pyramids and the Sphinx is certainly the favorite destination for visitors who for centuries have been entranced in admiring the funerary temples of the fourth dynasty.

The Pyramid of Cheops, or the Great Pyramid, is the largest structure on the Giza plateau and one of the Seven Wonders of the Ancient World, it is impressive and dominates the archaeological site, inside, along narrow corridors and passages, it is possible to visit the burial chamber and a huge sarcophagus.

Near the Great Pyramid there is a museum that preserves one of the ceremonial boats that were used in the past, the Solar Boat Museum.

Guarding the burial site is the iconic Great Sphinx, a monument with a lion’s body and a human head and face that seems to want to be the portrait of the face of pharaoh Khufu.

The Giza plateau is also the home of the Grand Egyptian Museum the new Egyptian museum in Cairo which houses a unique collection of artifacts from the various dynasties that reigned in Egypt, a large wing of the museum is dedicated to the treasure found in the tomb of the pharaoh Tutankhamun .

The vast necropolis of Saqqara and the nearby site of Dahshur host other interesting pyramids and are an unmissable destination for those who are fond of ancient history; the sites are located about 30 kilometers south of Cairo.

The step pyramid is Saqqara’s most popular attraction, but the whole area is littered with beautifully painted tombs, which are worth taking a few hours to explore.

Saqqara is so great, and its history as a burial site so vast, that excavations here continue to unearth valuable artifacts.

A few kilometers from Saqqara is the necropolis of Dahshur, a town located in the desert on the west bank of the Nile famous for the unusual Rhomboidal Pyramid and the Red Pyramid.

The site of Dahshur is particularly interesting because the pyramids present mark the transition from the step pyramid, such as that of Djoser in Saqqara, to the pyramid with canonical lines such as the famous pyramids of Giza. 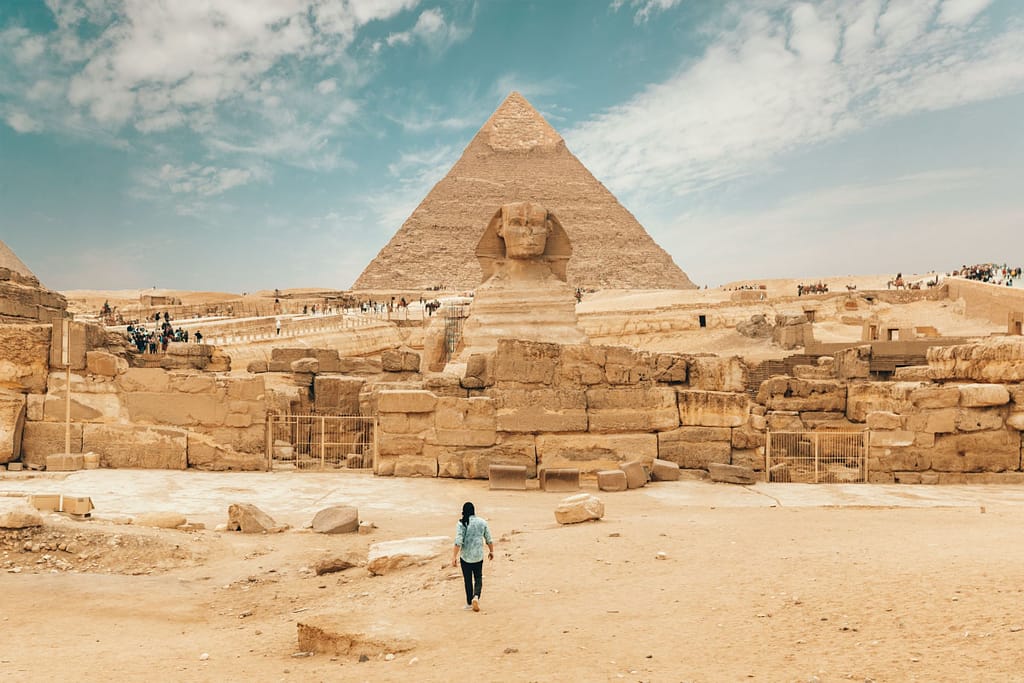 The old Museum of Egyptian Antiquities in the city center is an attraction not to be missed, the colonial building is fascinating and the exhibits on display are very interesting as well as the National Museum of Egyptian Civilization a unique center that combines antiquity. with aspects related to music, art and other aspects of the ancient Egyptian culture.

Khan el-Khalili is one of the most famous souks and one of the main attractions of Cairo; this market opens right in the historic center of the city, namely medieval Cairo, an area also known as Islamic Cairo; this ancient bazaar has existed since the 10th century and is a magical place full of colors, scents and people who trade the most disparate goods.

The Al-Azhar Mosque is located right in the heart of the Islamic quarter of Cairo, it is the most beautiful building of the Fatimid era in Cairo and one of the first surviving mosques in the city, completed in 972 AD; it is also one of the oldest universities in the world.

The area called the citadel of Cairo, built by Saladin in 1176, offers the best views of the city and is home to the Muhammad Ali Mosque which is the most famous monument; Nicknamed the Alabaster Mosque, its white stone and tall, disproportionately thin minarets are one of Cairo’s great landmarks.

At sunset, when the sky turns orange and the call to prayer echoes from the minarets, a felucca trip, the traditional sailing boat, on the Nile is a relaxing and fascinating experience.