Sudan happens to be home to its own set of incredibly impressive, ancient structures: the Meroe pyramids, Meroe, today a UNESCO World Heritage site, was the capital of the Kingdom of Kush, which was ruled by the Nubian kings known as the Black Pharaohs.

The center of a powerful civilization, Meroë served as the capital city of Kush’ kingdom whose robust culture thrived for centuries. Their grand architecture and works of art left a lasting testament to the greatness of the Nubian kings and queens.

The Nubians took control of Egypt and the black pharaohs became the twenty-fifth dynasty of Egypt or the Ethiopian dynasty, more precisely the Nubian king, Piye, successfully invaded and conquered Egypt, extending his control to the whole Nile Valley and Piye became the first pharaoh of Egypt’s 25th dynasty (ca 770-656 B.C.), the so-called Black Pharaohs.

After the Nubian pharaohs lost power, they retreated south from Egypt to form the Kingdom of Kush, which thrived for several centuries.

Sudan’s pyramids were designed as tombs for the Nubian kings and queens, they are significantly smaller in size than those that can be found in Egypt, built between 2,700 and 2,300 years ago, and feature smaller bases and steep sloping sides.

The archaeological site of Meroe, about 200 kilometers north of Khartoum, is home to about 200 pyramids and temples, more than there are in whole of Egypt. 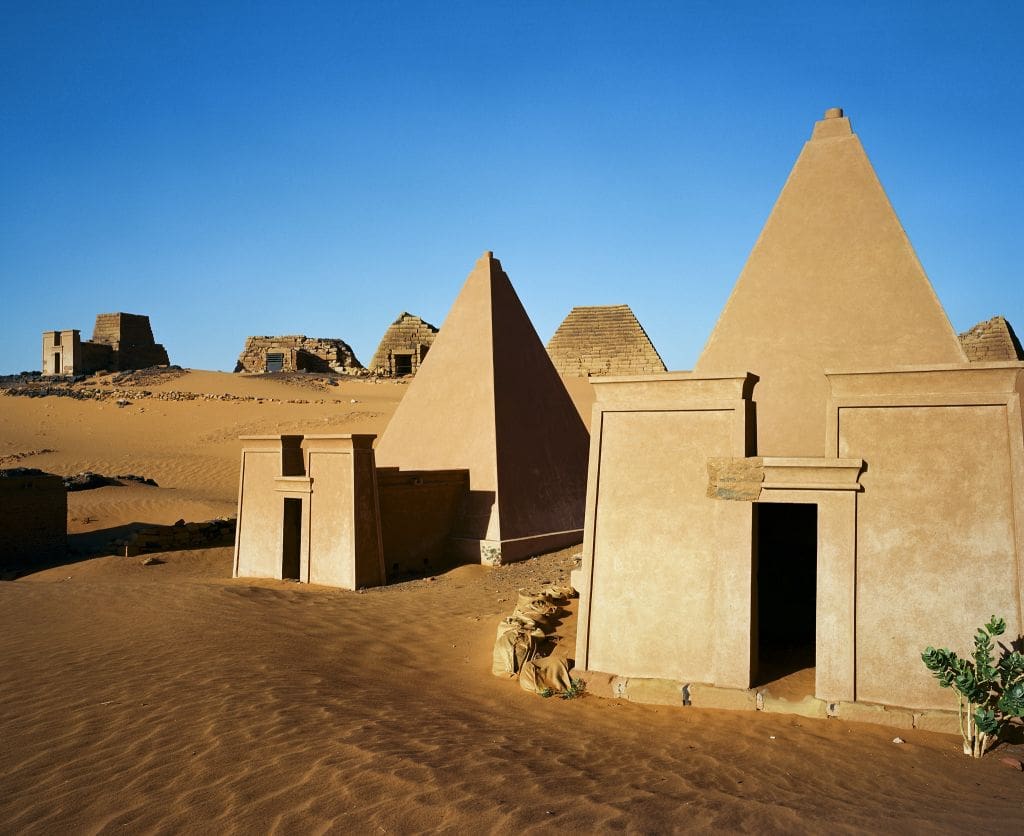 The ancient capital Meroe was strategically positioned at the crossroads of inland African trade routes and caravan trails from the Red Sea, the land around Meroë was also fertile and blessed with significant natural resources, iron and gold mines that fostered the development of a metals industry, especially gold working.

Meroë become the preferred necropolis around 250 B.C., there are two main burial areas: the south cemetery, the oldest, and the northern burial ground.

The northern area today contains the best preserved of the pyramids at Meroë, some of the most impressive tombs here are the final resting places for 30 kings, eight queens, and three princes.

Meroë’s earliest pyramids are believed to be step pyramids while later structures, built in the third century A.D., are simpler with smooth, steep sides.

In spite of the clear influence of the classic Egyptian design, Meroë’s pyramids are notably smaller, 8 to 30 meters high, and generally lack the pyramidion, a pointed capstone.

Inside the funerary sites are located underground rooms with vaulted ceilings: three for a king and two for a queen.

The sacrificed bodies of animals and, in some cases, of human servants were placed nearby the royal sarcophagus.

The pyramids stood the test of time until 1880, when the Italian explorer Giussepe Ferlini destroyed the tops of many of the structures in search of treasures to resell to the European museums.

While some of the pyramids have been restored, others remain effectively decapitated to the regret of scholars and archaeologists.