Rwenzori Mountains in Uganda are one of the most fascinating places on the continent; as early as 150 AD, Alexandrine Ptolemy wrote of a snow capped mountain range deep in the heart of Africa, which he claimed was the source of the world’s longest river, The Nile. He called it Mountains of the Moon.

Indeed, over the centuries, mountaineers who later explored Ptolemy’s mountains found the high Rwenzori glaciers and snow peaks whose melt waters certainly represent the highest springs of the Nile.

Reaching an elevation of 5,109 m, Rwenzori is Africa’s tallest mountain range exceeded in altitude by Mt Kilimanjaro and Mt Kenya, carrying Africa’s third, fourth and fifth highest peaks that are visible for miles around.

Some of its peaks incomparable, beautiful and mist-shrouded carry permanent snow and glaciers, while the lower slopes are covered with dense forest.

The Mountain’s slopes above 1,600 m are the preserve of hikers who rate the Rwenzoris to be the most challenging of all African mountains.

A variety of large mammals inhibit the lower slopes but the Rwenzori are notable more for their majestic scenery and varied vegetation.

Its five distinct vegetation zones montane forest, bamboo forest, tree heath-bog, Hagenia-Rapanea scrub and afro-alpine moorland provide a unique backdrop to one of the most magnificent national parks in the world.

In 1991, Rwenzori Mountains were gazette as a National Park and is both a World Heritage and RAMSAR site. 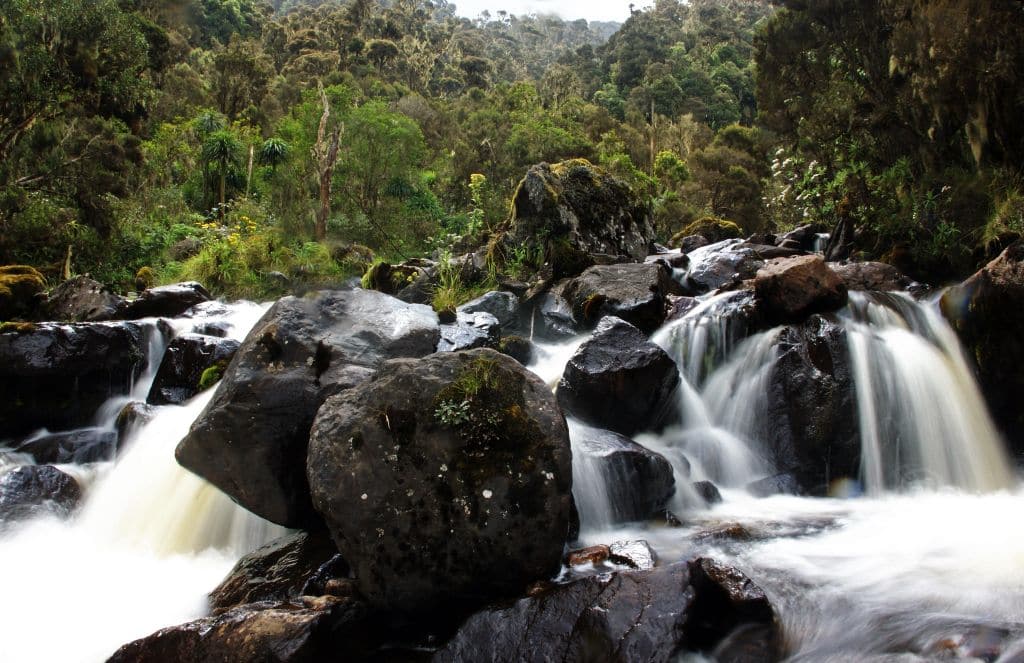 Mountain climbing is the most attractive activity on the legendary mountains of the moon.

Its diverse heavily snow capped peaks are one of the few pristine and spectacular landscapes of the world.

Although a variety of large mammals inhabit the lower slopes, the Rwenzori’s are notable more for their majestic scenery and varied vegetation.

The ranges are scenic with pristine and spectacular landscape that comprise of waterfalls, hot springs, blue cirque lakes, snow clad peaks and stratified vegetation which is an attraction not only for visitors but also creates potential for research as well as resources for the nearby communities.

Elephants, buffalos, giant forest hogs, bush bucks, chimpanzees and leopards are present but rarely seen; however primates such as the black and white colobus and the blue monkey may be seen.

In the Rwenzori’s are also some unique and arre animal species like the three horned chameleon, the Rwenzori colobus, Rwenzori Turaco and the Rwenzori double collared sunbird.

The park is also a cultural heritage for the neighboring communities; eighteen sacred sites have been identified, mapped and protected as worship areas.

This is done along two routes; a 7 day trekking of the central tourism circuit and a 5-day trek along Kilembe route to the southern part of the park.
Shorter hikes can be arranged.

The trail is a tough but rewarding hike taking in all vegetation zones and the glacier peaks.