The Omo Valley is located in the southern part of Ethiopia, it is a magical place where you have the feeling of stepping back in time, it is a kaleidoscope of tribes each with unique and different traditions, ceremonies, clothing and body modifications.

During our trip we will have the privilege of spending a few days in this fascinating land and we will visit some traditional villages that will allow us to learn about the lifestyle of these populations.

Main populations of the Omo Valley in Ethiopia

The Karo are a small group of about 1500 individuals, they are a people of shepherds and they preserve their ancestral traditions.

The main feature of the Karo is their ability in body painting, on the occasion of ceremonies, holidays or simply the visit of foreigners to the village, the inhabitants paint the face and body with lines and circles.

The colors are obtained from natural substances found in nature, for example, white is obtained by pulverizing gypsum, red from iron dust, gray from ash and yellow from a mineral present in the area.

The hairstyle is also sophisticated and often enriched with an eagle feather which is a sign of courage.

The Karo women take care of the village consisting of some wooden huts and small stilts to keep the grains and poultry during the night.

The women wear numerous necklaces while the clothing is limited to a leather or fabric kilt, the men look after the livestock and protect the village from rival tribes and crocodiles that infest the nearby Omo River; they are always armed with the inseparable Kalashnikov. 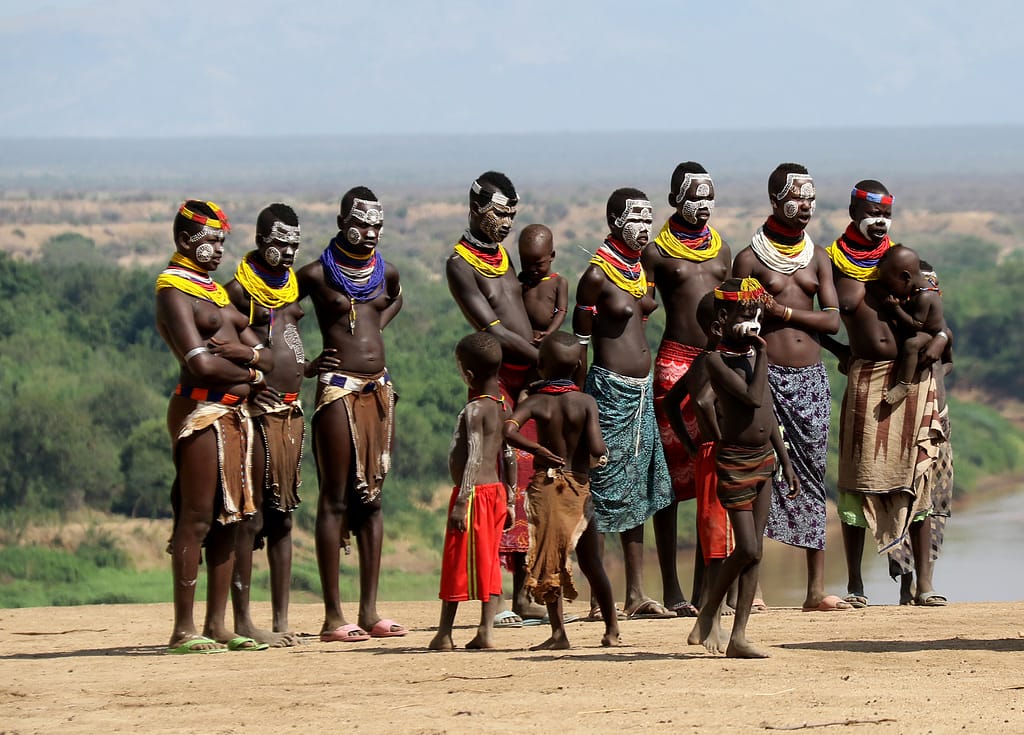 The Mursi are the most iconic people of the Omo Valley and all of Ethiopia, they are immediately recognizable due to the lip plate worn by Mursi women.

Within the Mago National Park there are some Mursi villages, entering the park you have the opportunity to spot some antelopes while lions and other predators, although present, are practically impossible to spot due to the dense vegetation.

The Mursi are among the most characteristic peoples we will meet on our trip from Cape Town to Cairo, they are a people of farmers and ranchers and are known as particularly strong and fearsome warriors.

Among the social statuses an important role is played by the cattle owned and the Kalashnikov which are also essential elements for a man who wants to find a wife.

The women wear only a beaded skirt and show off elaborate headdresses and the lip plate they wear during ceremonies or when visiting an important guest.

Scarifications are a very present element in Mursi culture, both men and women sport elaborate scarifications that are an element to appear attractive in the eyes of a possible partner, for men a scarification could also mean the courage shown in battle or the killing of a ferocious animal.

Attention to one’s appearance is a characteristic of the Mursi who use numerous bracelets, necklaces and anklets as well as feathers, shells and warthog fangs.

The Hamer are a very sociable and non-aggressive tribe, they are dedicated to pastoralism but try to cultivate small plots of land, they are also excellent beekeepers.

The Hamer are an interesting people for their traditional clothes and for the particularly elaborate and showy hairstyles of both men and women.

Women wear long bob hair up to the base of the neck, the hair is gathered in thin braids mixed with a mixture of resin and ocher powder that gives the hairstyle a beautiful copper red color.

Another characteristic element of the Hamer are the scarifications on the body, of which they are very proud, the cuts are made in every area of ​​the body and while the wound is open they sprinkle it with ash to create more evident scars.

The accessories worn by men and women are many and well made, the women wear heavy necklaces that indicate their role within the family, the first wife will in fact wear a necklace that has an obvious cylinder while the other wives wear others. simpler necklaces.

The rite of passage to adulthood, the Bull Jumping, is a very interesting ceremony and which, with a little luck, we will have the opportunity to attend.

The young beginners must demonstrate their courage and physical strength by jumping on the back of a row of bulls, usually from 7 to 10 heads, running on the backs of the bulls without falling; they must repeat the performance at least four times.

The ceremony involves the whole village that gathers in a defined place and gives life to a series of ceremonies and rituals that last all day until sunset when the beginning of the jump will take place.

The Konso are a people with marked features, slightly almond-shaped eyes and a tall and slender body, the men always carry a knife and a stick / spear while the women are adorned with a large amount of jewelry.

The Konso people are famous for their fortified villages and for the cultivated land on the hills thanks to the construction of terraces that UNESCO has declared a World Heritage Site.

The traditional village has a very massive perimeter wall, you enter the village through monumental entrances made with large blocks of stone and logs, the wall defending the village hides a maze of alleys that run between smaller enclosures that delimit the individual housing units consisting of two or more huts and chicken coops or stables.

Each family builds their own gated compound and as the villages expand it becomes necessary to build a new external defensive perimeter wall, resulting in villages with up to five increasingly larger defensive walls.

Finding your way around the village is not easy and it is easy to get lost.

The Konso follow ancient pagan traditions, they believe in a creative deity who pray in special common huts made within the village, practice traditional rituals and remember the dead with wooden totems called waqa that represent the hero of the family his wife and, smaller in size, the enemies or dangerous animals he has killed.