Old Dongola, as known as Dungulah or Dunkula, is located in modern Sudan, was the capital of the ancient Nubian kingdom of Dongola or Makuria or Makurra, which flourished from the 6th to 14th century.

A Christian kingdom for at least 750 years and then Muslim after incursions by the Mamluks of Egypt in the early 14th century CE, Dongola prospered thanks to agriculture and trade relations with the Byzantine Empire via Egypt and African kingdoms to the south and east.

The settlement of Old Dongola grew from the 6th century and was located on the River Nile bend between the third and fourth cataract in what is today northern Sudan.

The kingdom prospered thanks to the use of the water wheel, or saqia, which irrigated land previously unsuitable for agriculture. Crops grown in the region included wheat, barley, millet, dates, and vines.

The Kingdom of Dongola adopted Christianity orthodox Melkite following a mission originally sent by the Byzantine emperor Justinian I which arrived between 540 and 543 CE after having travelled down from then Christian Egypt.

However, there had already been Christian missionaries in the kingdom before this and the precise date of the religion’s official adoption is not known; tombs have also indicated that some pre-Christian practices still continued well into the Christian era of Nubia.

Around a century later, the kingdom adopted the Monophysite doctrine of Christianity following influence from the Christian Kingdom of Axum in Ethiopia and another Byzantine mission, this time led by one Bishop Longinos who trained local clergy.

In a further connection, the Patriarch of Alexandria would appoint the bishops in the Kingdom of Dongola right through the medieval period.

The religion was further spread throughout the kingdom via the establishment of churches in towns and rural monasteries. 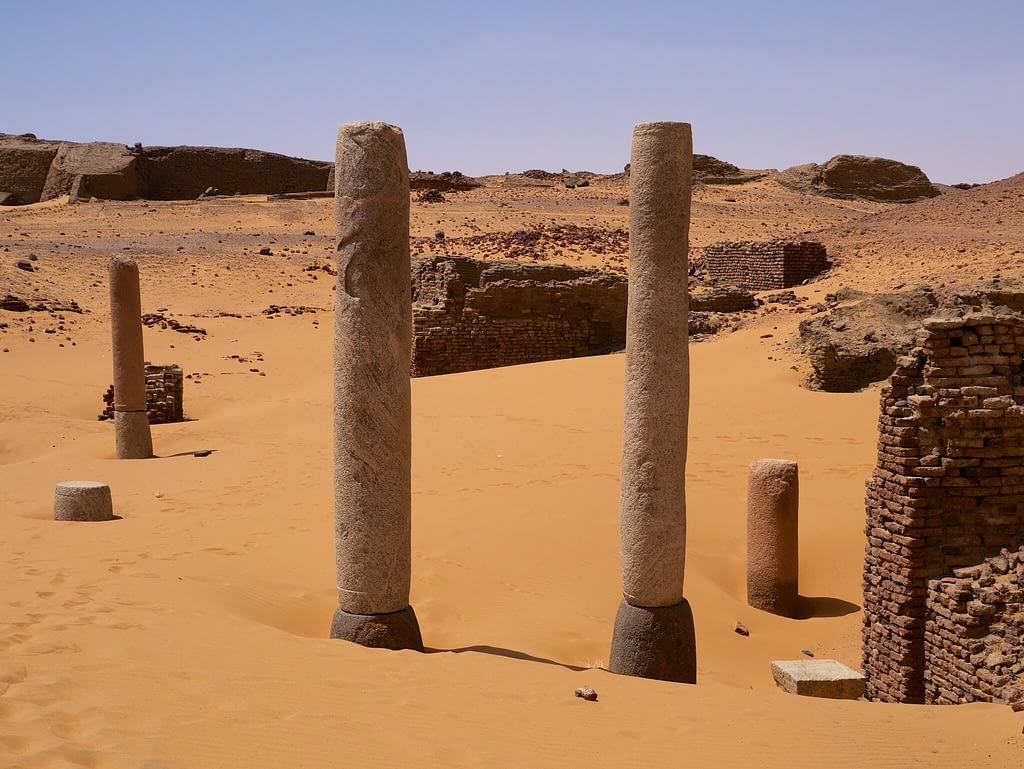 The 7th century CE saw the Kingdom of Dongola absorb the smaller neighbouring Christian kingdoms located to the north, and perhaps, too in the south, forming a unified state led by King Merkuiros of Dongola, which remained the capital.

The unification was likely a response to the increased threat from Muslim North African states, especially Egypt, although Nubian warriors, armed with javelin, sword, and bow, were able to hold their own and maintain the kingdom’s independence. However, a large Muslim raid in 651 CE, which included a 5,000-strong Muslim force, had attacked the capital Old Dongola with catapults.

As a result of this siege, a truce was declared and a treaty was signed between Dongola and Egypt c. 652 CE, known as the baqt.

In return for an annual tribute of 360 slaves, the Christians would receive grain, cloth, and wine; all Muslims were to be given protection as they passed through the kingdom, any person was to be allowed to worship in a mosque at Old Dongola, and any escaping slaves were to be sent right back northwards.

In return, Dongola was to be left to its own devices. Although some minor conflicts did break out, the treaty was largely respected for the following six centuries.

Peace and the unity of the Nubian kingdoms brought prosperity; trade networks connected Dongola to neighbouring states, especially Egypt as evidenced by a large number of Egyptian amphorae found at Old Dongola and other Nubian sites.

Ivory was exported to the Byzantine Empire while gold went to Ethiopia; in the other direction, ceramics and glassware were imported in great quantities from Egypt.

Byzantine influence was not only seen in religion and trade relations but also general culture, with the well-off residents of Dongola adopting Byzantine clothing and women wearing long colourful robes decorated with intricate embroidery.

The political administration was similarly modelled on Byzantine ideas with an eparch governing provinces; yet another Byzantine influence was the use of the Greek and Coptic languages in the kingdom.

The stability Dongola had long enjoyed was rudely shattered by the Mamluks of Egypt who attacked the kingdom in 1276 CE.

The cathedral and palace of Old Dongola were converted into mosques in 1317 CE. and the Kingdom of Dongola fell into historical obscurity.

In the 18th century CE, the caravan route had shifted elsewhere and Dongola was definitively abandoned, its ruins left to the desert sands.

Today you can visit the archaeological remains of this important city of the past, a site of incredible charm.