During our trip from Cape Town to Cairo we will cross Kenya and among the other destinations that the country offers we will visit three lakes of the Rift Valley: Lake Nakuru, protected by the homonymous Lake Nakuru National Park, Lake Bogoria and Lake Naivasha. 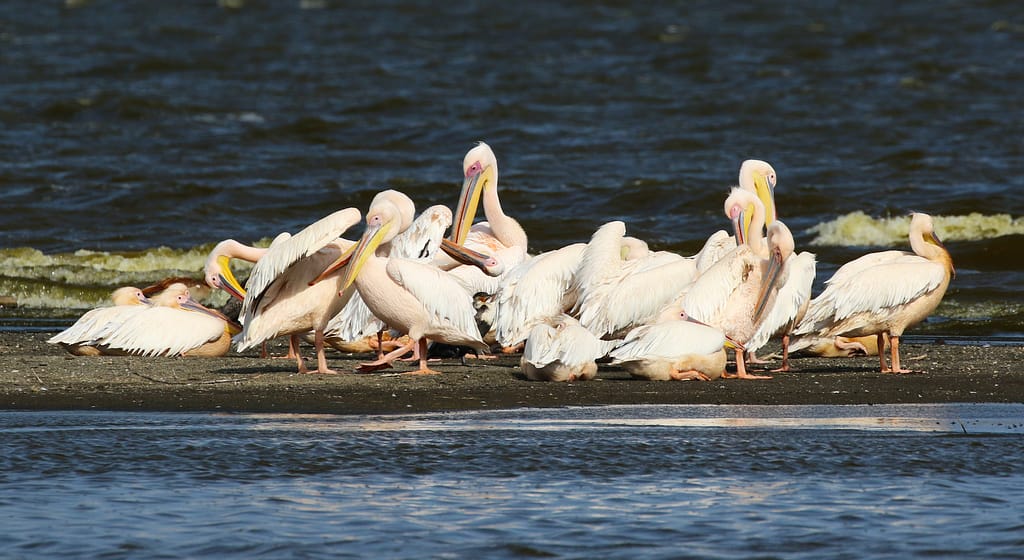 Lake Nakuru National Park is a spectacular wildlife paradise that has become world famous for the flamingos that flocked to Lake Nakuru to feed on the algae that form on the lake floor.

Lake Nakuru is a shallow alkaline lake that gives its name to the national park that was established in 1961 to protect it.

The lake is part of the Rift Valley soda lakes, a group of lakes that cross the eastern side of the African continent.

Until a few years ago it was the most incredible bird show in the world with an incredible number of flamingos, major and minor, that populated its waters, up to 1.5 million; unfortunately due to some natural and non-natural factors, the number of flamingos has decreased, fortunately the situation is improving but it will still take some time to return to its old splendor.

The Lake Nakuru National Park is still stunning, one of the most beautiful in Kenya, imposing rocky escarpments overlook the forest, waterfalls, swamps, savannah, hills and acacia forests dot the lake.

The park is a true birdwatching paradise: pelicans, cormorants, kingfishers, ostriches, storks, herons and fish eagles are just some of the more than 400 birds recorded in the park.

In the park there are numerous species of mammals including the rare Rothschild’s giraffe, white rhinos, black rhinos, zebras, hippos, hyenas, buffaloes, lions, cheetahs, leopards and various species of antelope.

The dense forest of yellow acacias, also known as the fever tree, is home to herds of impalas and waterbucks and giant pythons.

A curiosity about the Yellow Acacia: it is known as the fever tree because the first explorers often fell ill with malaria when they camped near these plants so they considered it responsible for the disease, in reality it was not the acacia the cause but the marshes and swamps where this tree usually grows.

Lake Bogoria is a shallow saline lake within the Great Rift Valley north of the equator, the lake is famous for its hot springs, geysers and huge amounts of blue-green algae that attract hundreds of flamingos that they are displaced by the nearby Lake Nakuru.

The lake is dotted with thermal springs and geysers on the western shore, fascinating phenomena caused by the geothermal activity of the Great Rifle.

In 2000 it was classified as a wetland protected by Ramsar and Lake Bogoria acquired the status of a National Reserve.

In addition to flamingos, the Lake Bogoria National Reserve hosts numerous species of aquatic birds and not in addition to a good presence of mammals in particular leopards, mongooses, caracals, warthogs, zebras and the greater kudu which is particularly numerous here.

Lake Bogoria less than 40 kilometers from Lake Nakuru National Park is easily visited in a day.

Lake Naivasha is a beautiful freshwater lake, located on an alluvial plain in the valley floor and bordered to the north by a large papyrus swamp; it is the highest of the lakes in the eastern part of the Rift Valley system at 1,884 meters above sea level.

The lake owes its name to the word Maasai Nai’posha which means water that is agitated by the afternoon wind that can make the lake suddenly agitated and produce waves.

Much of Lake Naivasha is surrounded by forests of yellow-barked Acacia Xanthophlea, known as the yellow fever tree, this habitat is home to giraffes, zebras and the beautiful black and white colobus that gracefully jump from branch to branch.

Buffaloes frequent the shores of the lake and a large population of hippos inhabits the waters of the lake.

The main activity on Lake Naivasha is a boat safari that allows you to get close to the hippos and observe the birdlife, the lake is in fact a great destination for birdwatching with over 300 registered species.

On the shores of the lake is the home of Joy and George Adamson, famous for the lioness Elsa and for the book and movie Born Free which tells the story of the lioness.