The Okavango Delta is arguably Botswana’s most famous area, famous for its abundant wildlife, water safaris and commitment to low-impact tourism.

The Okavango Delta is one of the largest inland deltas in the world, it is one of the few large delta systems that does not flow into the ocean or the sea and has been included in the UNESCO World Heritage Sites.

The Okavango Delta is made up of over 150,000 islands, some tiny, others more than 10 km long; the largest island in the delta is Chief’s Island, about 70km long and 14km wide and once a tribal chief’s private game reserve, it is now one of the best places to spot wildlife.

The water that feeds the delta comes from Angola and supports an incredible concentration of animals, the delta is in fact known as one of the richest areas of wildlife in Africa.

Among the animals that can be seen there are lions, buffaloes, leopards, leopards, elephants, wild dogs, rhinos, hippos, giraffes, spotted and brown hyenas and different types of antelopes.

Lechwe are the most populous antelopes with a population of around 60,000 that live in the delta.

The Okavango Delta is a great place for bird watchers with over 400 types of birds living in these wetlands of Botswana.

One of the most fascinating ways to explore the delta is a mokoro excursion, these traditional canoes were traditionally made by hollowing out the trunks of mature trees such as sausage trees, today they are made of fiberglass rather than wood in the attempt to conserve the ancient trees of the Okavango.

The resulting canoes are about two meters long, with a slim shape ideal for navigating through the narrow and reed-lined waterways of the delta; each mokoro, which can accommodate one or two passengers, is guided by a single poler, an expert guide who is at the end of the boat’s tail and pushes it with a long wooden pole called a ngashe.

The mokoro glides silently, elegantly slow and close to the water and allows you to fully savor the cacophony of wetland sounds as you advance through canals, lagoons and palm-fringed islands: the singing of hundreds of birds, the croaking of tiny reed frogs , the hum of insects, the hum of semi-submerged hippos and the spray of crocodiles sliding from the river banks into the water while in the distance you can hear the trumpeting of elephants approaching to splash or drink, or the disturbing yelp of wild dogs or African hyenas.

The mokoro offers a unique and close observation point on the species that flock to the waterways of the delta; admiring the masses of water lilies floating along the water channels or sighting one of the rare species of antelope adapted to the delta swamp, such as the sitatunga, the black antelope or the lechwe is an enchanting experience. 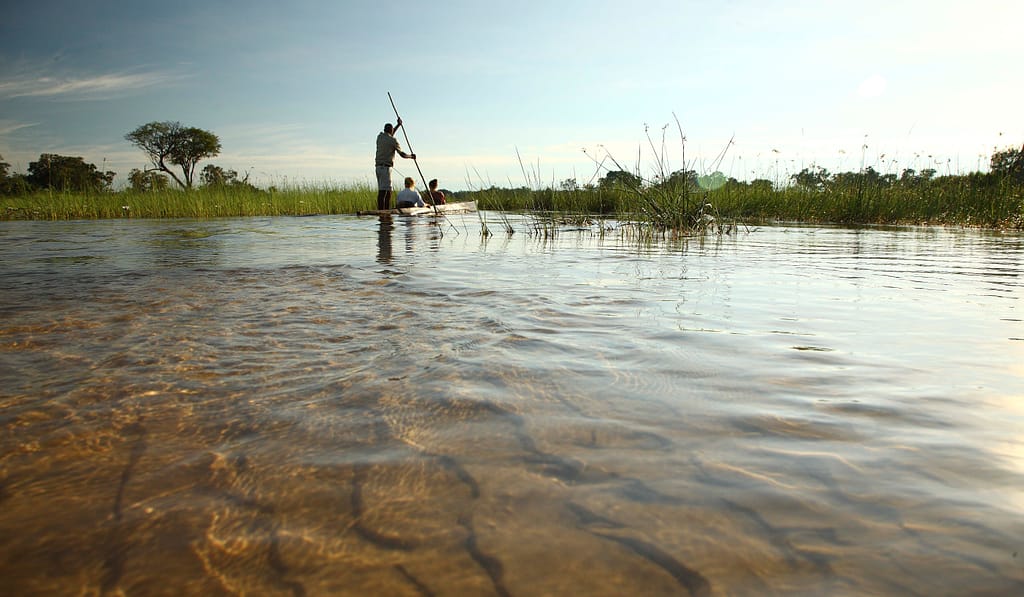