Lake Malawi is the ninth largest lake in the world and the third largest lake in Africa, eclipsed by lakes Victoria and Tanganyika, it is also the second deepest in Africa; it was formed by volcanic activity about 2 million years ago and covers an area of ​​over 29,000 square kilometers.

The first European to visit the lake was Candido José da Costa Cardoso, a Portuguese merchant who arrived here in 1846; David Livingstone reached the lake in 1859 and described it as a Lake of Stars, referring to the thousands of fishing boats that sail on its surface at night with the lanterns visible from the coast reminiscent of a starry sky.

According to UNESCO, it is home to more distinct fish species than any other lake on the planet, with more than 1000 species of fish and about 700 types of cichlids; new species are being discovered regularly and some scientists believe the lake may contain more than 2,000 species.

Africa is mystic; it’s wild, it’s a photographer’s paradise, an escapist’s Utopia, it is what you will, to a lot of people, as to myself, it is just ‘home.”

The result of this exceptional diversity makes the lake a treasure of global biodiversity because almost all the species it contains are not found anywhere else on the planet, especially the rare Mbuna fish, highly sought after by aquarium enthusiasts for its brilliant color.

Fishing is the main activity of the inhabitants of the villages bordering the lake, but the trade in ornamental exotic fish for aquariums around the world is also of great importance.

Lake Malawi is one of the most impressive and beautiful lakes in the southern hemisphere, its sandy beaches and palm trees make it a perfect destination for relaxation and for enjoying numerous water activities.

Lake Malawi has two inhabited islands: Likoma Island and Chizumulu Island; the largest being the Likoma island, and together make up the Likoma District.

Lake Malawi is very beautiful and attracts tourists for its islands and beaches, some of the most notable activities offered by the local resorts include snorkeling, boating, kayaking, scuba diving, sailing, camping, water skiing, island trips, soccer on the beach and many other water activities, plus Lake Malawi and its islands are home to some of the most beautiful beach lodges in Africa.

Malawi is possibly one of the best spots for freshwater diving and snorkeling in Africa, the visibility is excellent, the water is warm and there is no need to go out by boat to see the nearest coral reef. 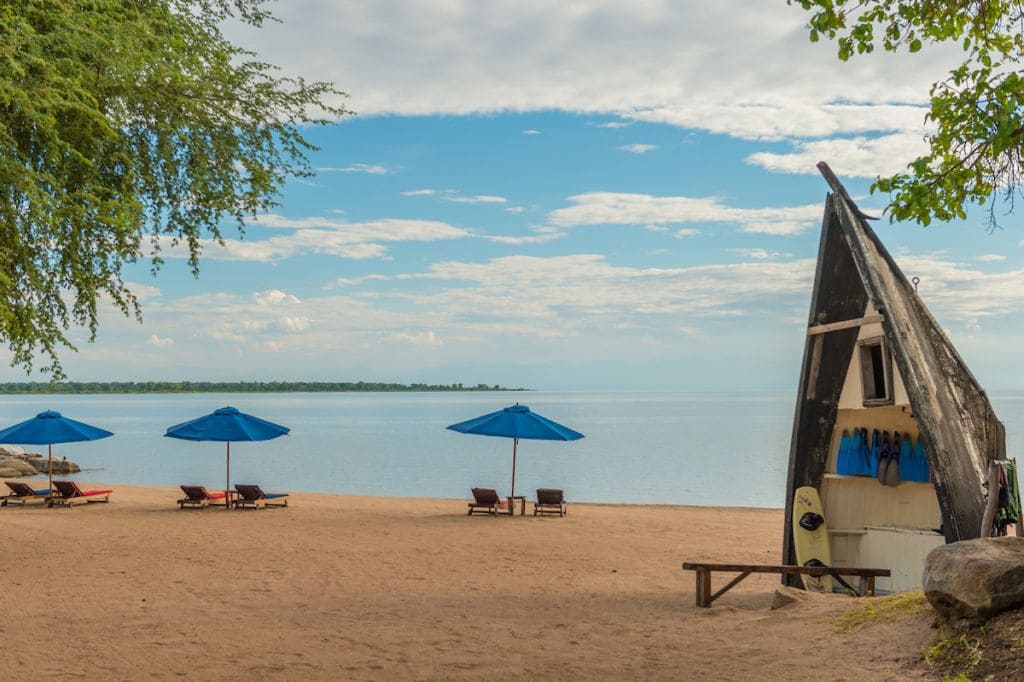 A curiosity related to Lake Malawi dates back to the First World War, on August 16, 1914 Lake Malawi was in fact the scene of a naval battle between the British gunboat SS Gwendolen, a small military ship with large guns, used mainly in areas near the coast, and the gunboat of the German Empire the Hermann von Wissmann.

The British navy neutralized the enemy with a single cannon shot from about 1.8 kilometers (1.1 miles); it was the first naval victory of the British Empire in the First World War.

Lake Malawi National Park is a national park located in Malawi at the southern end of Lake Malawi; was registered as a UNESCO World Heritage Site in 1984.

Lake Malawi National Park is an area of ​​exceptional natural beauty with its islands and clear waters against the backdrop of the Great African Rift Valley escarpment, habitats vary from rocky coasts to sandy beaches and from wooded hills to swamps and lagoons.

The Park was established to protect and ensure the conservation of biodiversity thanks to its exceptional diversity of freshwater fish, the lake contains in fact 30% of all known cichlid species in the world, but also protects the rich fauna of mammals , birds and reptiles.

In the park you can always look out for the Little Five, the equivalent in miniature of the Big 5: Elephant Shrew, the Buffalo Weaver, the Leopard Tortoise, the Ant Lion and the Rhino Beetle.