Giza: the Pyramids and the Great Sphinx

The rocky plateau of Giza on the west bank of the River Nile in northern Egypt is home to an ancient wonder, the Pyramids.

The archaeological site of Giza with the Pyramids and the mysterious Sphinx are a Unesco World Heritage Site and represent one of the best known destinations in the world, the pyramids of Giza were royal tombs built for three different pharaohs.

Egypt’s pharaohs expected to become gods in the afterlife. To prepare for the next world they erected temples to the gods and massive pyramid tombs for themselves, filled with all the things each ruler would need to guide and sustain himself in the next world.

Of the ancient complex today remain the pyramids and some ruins of the various funerary temples which were built near each pyramid and which were connected, via a causeway, to a downstream temple on the edge of the Nile floodplain.

Nearby were also subsidiary pyramids used for the burials of other members of the royal family. 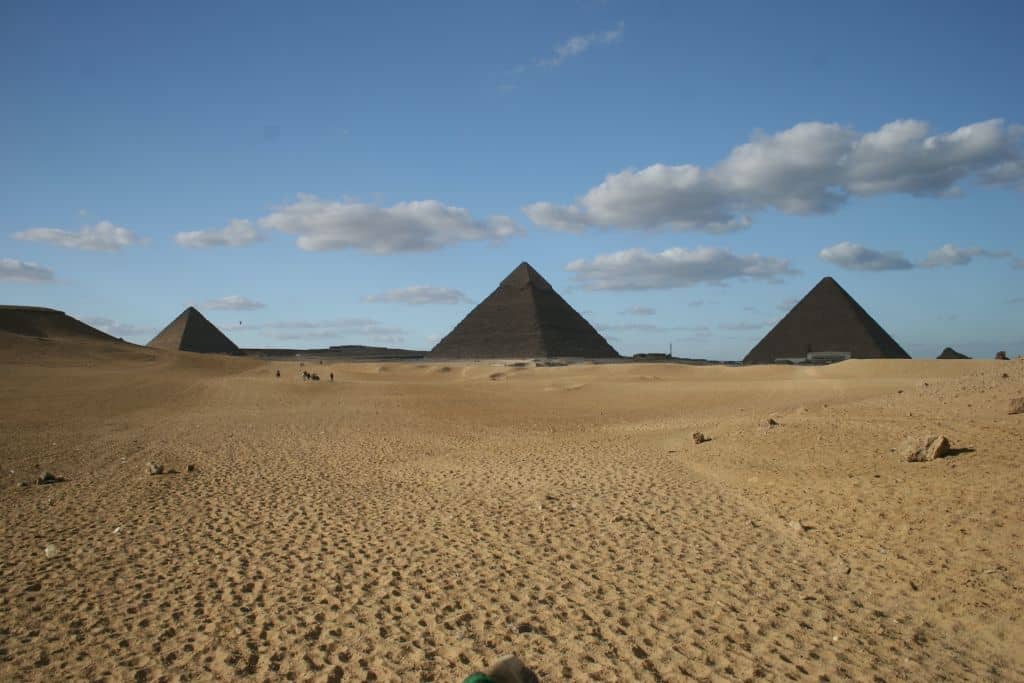 The northernmost and oldest pyramid of the group was built for the pharaoh Khufu or Cheops, it is now called the Great Pyramid, it is the largest of the three; the length of each side at the base is on average 230 meters and its original height is 147 meters.

The largest pyramid of the Giza necropolis employed thousands of men, an estimated 20,000 workers, in the construction and it took 20 years to build, it was the tallest man-made structure in the world for about 3,800 years.

About 2.5 million stone blocks were required to be cut, moved and positioned, some of the limestone blocks used to build the pyramid weighing two tons, and were positioned using a system of ramps and pulleys.

Some of the stones are limestone quarried near the site, but the larger granite stones came from Aswan, over 500 miles away.

The 5.75-million-ton structure is a masterpiece of technical skill and engineering ability.

The central pyramid was built for Khafre or Chephren, the structure measures 216 meters on each side and was originally 143 meters high.

Khufu’s son, pharaoh Khafre, built the second pyramid in Giza, around 2520 BC, his necropolis also included the Sphinx, a mysterious limestone monument with the body of a lion and the head of a pharaoh.

The Sphinx now serves as a sentinel for the entire Pharaoh’s tomb complex.

The Pyramids of Giza were once covered in a white casing made of glistening limestone which was so polished that it would reflect the sun’s rays, the stones reflected sunlight so well that the Egyptians called the pyramid “Ikhet” which means ” Glorious light “; only the pyramid of Chephren still retains the outer shell in limestone in its highest part.

The southernmost and last pyramid to be built was that of Menkaure or Menkaure, it is 66 meters high while each side measures 109 meters, and is considerably smaller than the first two.

Built by pharaoh Menkaure around 2490 BC, it featured a much more complex mortuary temple.

Each massive pyramid is only part of a larger complex, which includes a palace, temples, solar boat pits, and other features.

All the pyramids in Egypt, including those built on the Giza plateau, are located on the west bank of the River Nile because that’s where the sun sets every evening, symbolizing the kingdom of the dead.

The third of the Giza Pyramids is considerably smaller than the first two. Built by Pharaoh Menkaure circa 2490 B.C., it featured a much more complex mortuary temple.

Each massive pyramid is but one part of a larger complex, including a palace, temples, solar boat pits, and other features.

All pyramids in Egypt, including those built on the Giza plateau, are situated on the west bank of the River Nile because that is where the sun sets every evening, symbolising the realm of the dead.

The Great Sphinx is among the largest sculptures in the world, measuring approximately 73 meters in length and 20 meters in height; features a lion body and a human head wearing the royal headdress.

There are numerous theories on the origin of the Sphinx, the body is definitely disproportionate to the head and it is believed that it was originally sculpted in the shape of a lion and only later was it reworked to give it the likeness of the pharaoh.

Even the legend that it was the Napoleonic troops who destroyed the nose of the sphinx with a cannon shot is false, in reality some illustrations prior to Napoleon depict the already damaged sphinx.