Ethiopia is a country rich in history and ancient traditions. It is also the only African country that eluded European colonialism and for this reason it managed to keep unchanged most of its cultural identity.

In the north of the country, in the Coptic Christian regions, there are extraordinary examples of Ethiopia’s past. The Historical Route is a circuit that includes the main destinations and the Unesco World Heritage sites.

Of all the exotic fragrances and experiences of my stay in Ethiopia, the incense is the one I miss more.

Traveling along the routes of Christian Ethiopia you have the opportunity to make a travel through time, immersed in ancient atmospheres that bring you back to medieval times and be inebriated by the strong spirituality of churches and monasteries which appear frozen in time.

Starting from Addis Ababa and heading north, one of the interesting stopovers is the Debre Libanos monastery, dated XII century, founded by the Saint Tekle Haymanot to whom the tradition bestows the spread of the Christian religion on the Ethiopian plateau.

Tekle Haymanot is certainly one of the most venerated saints. According to the myth, he meditated in a cave for 29 years and is often depicted standing on one single leg, a position of prayer and an act of penitence. It is said that the leg, not resting on the ground, withered and fell off the trunk.

Today the monastery is a pilgrimage destination for the Ethiopian worshippers and home to one important religious school. Inside the monastery, monks keep many ancient manuscripts and, in the church, you can admire magnificent paintings.

During the journey to the north, it is possible to appreciate the fantastic gorge of Blue Nile and then cross the splendid landscapes and villages of the Amhara people, a grandiose scenery with green valleys and mountains.

Bahar Dar is the capital of the Amhara region located on the banks of the Lake Tana, the largest lake in the country famous for its monasteries and churches standing on its islands.

A boat trip on the lake is the best way to learn the secrets kept by monasteries and churches of the islands. The sacred buildings contain picturesque colourful paintings of religious scenes, ancient manuscripts and an impressive display of illuminated bibles. The atmosphere is relaxing and the priests are always available to tell you the history of the places and to show you the splendid and enormous processional crosses.

The lake is a source of food for numerous species of water birds, including cormorants and pelicans. Fishing is thriving and it is fascinating to watch the fishermen glide over the waters aboard the tanqwa, the traditional canoes made of papyrus leaves tied together.

Upstream of Lake Tana there are the legendary springs of the Blue Nile. The discovery of these springs is the subject of a discussion: the British explorer James Bruce claimed to have been the first to discover them in

1770 but, in reality, it seems that the Portuguese identified them first over 200 years earlier, around 1500.

The Blue Nile leaves Lake Tana and continues its long run towards the Mediterranean reaching Khartoum, Sudan, where it joins the White Nile.

The falls of the Blue Nile, the Tis Isat, or the smoke of fire, are still visible even if the construction of a dam has limited it power and spectacularism. James Bruce described them as follows: It was a stupendous vision, so extraordinary, so fully wild, that if even centuries were added to the longest human life, they would have not been enough to erase it from memory. It was one of the most splendid and extraordinary scenes of Creation. 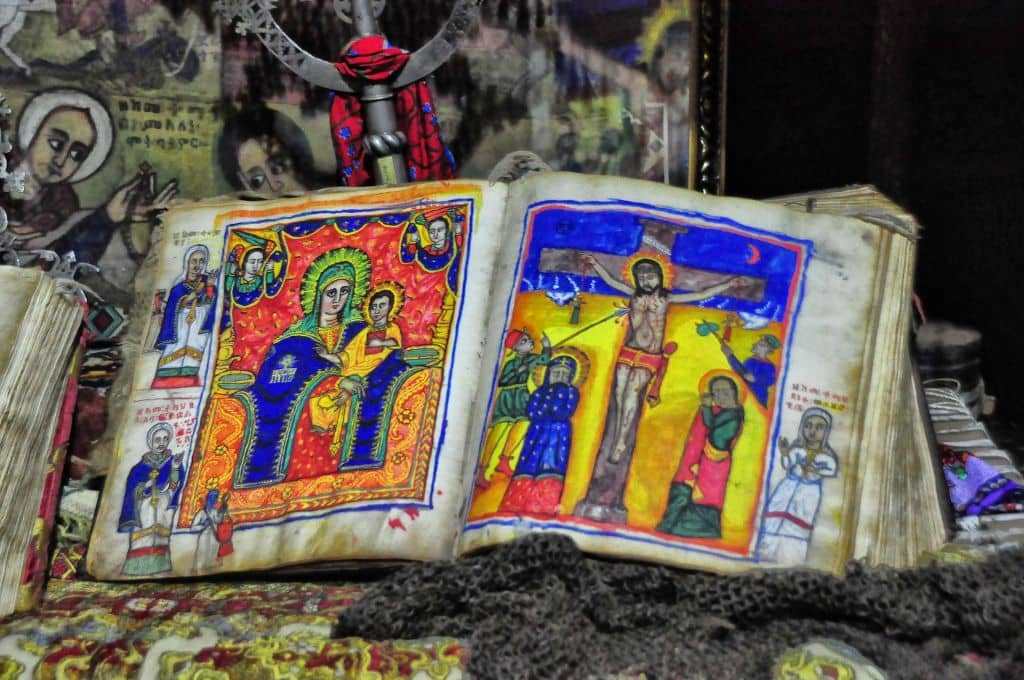 Gondar, the former capital of Ethiopia, is certainly one of the most important cities in Ethiopia, in particular from a historical point of view.

Gondar is called the city of castles. These constructions make it fascinating and mysterious, in particular the Royal Enclosure, located in heart of Gondar and that gives the city much of its character, which behind the perimeter walls preserves five castles and several smaller buildings. It is a fascinating place to explore.

The archaeological site is surrounded by fortified walls about two kilometres long with twelve gates to access the complex.

Inside the complex stood the monumental castles built to host the Ethiopian kings, first of all the fort desired by the Emperor Fasiledes, built in 1634, characterized by a rectangular plan and four circular towers placed at the corners of the fort.

The Castle is a wonderful unique combination of Portuguese, Axumite and even Indian influences.

Not far from the castle there is another work commissioned by the Emperor: one large swimming pool, known as the Pavilion of Delight, surrounded by beautiful gardens with gigantic sycamores.

Debre Birhan Selassie’s church, the Light of the Trinity, is considered one of the most beautiful churches in Ethiopia and is located two kilometres away from the city of Gondar.

The ceiling is, in fact, richly decorated with the faces of 80 winged cherubs in bright colours, made according to the traditional Ethiopian style. Also the walls are magnificent with scenes from the Old and New Testament.

Lalibela: the Jerusalem of Ethiopia

The city of Lalibela is one of the most extraordinary destinations in the world. Its churches carved into the rock are masterpieces of human intelligence and the city was included by UNESCO in the list of the World Heritage Sites.

The rock churches are breath-taking. They have been carved out of the rock and from the ground you can only see the top of the ceiling, but it is enough to look at the dig to be amazed by such work and faith.

In fact, the churches of Lalibela hide in the bowels of the rock, surrounded by deep trenches and connected to each other by underground tunnels, open-air tunnels and trenches.

The rock church complex, commissioned by King Lalibela to reproduce the sacred city of Jerusalem in Ethiopian land, today it is divided into two distinct groups.

The monolithic churches are all different from one another but what they share is the atmosphere of great sacredness and the priceless treasures that they enshrine.

For an in-depth description of the churches, we refer you to the articles of deepening of Exploring-africa